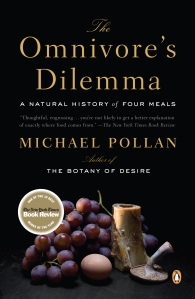 Michael Pollan is the perfect investigative author. The Omnivore’s Dilemma is imbued with scientific facts, but expertly explained and organized, so that any ‘reader can clearly understand the relationships between data and society. For example, in Pollan’s opening discussion of the creation of corn, he is careful not to overwhelm the reader with a lengthy treatise about genotypes, carbon atoms, and cross pollination. Rather, he incorporates this information into an enjoyable narrative in which he describes the progress of corn. Corn becomes a plant with a mind of its own, a creature that, with the help of human cultivation, government subsidization, and corporate domination, has walked its way out of the classic pastoral American farm and into the recipe of every supermarket product.

In addition to Pollan’s enlightening discussion of corn, another one of my favorite parts of The Omnivore’s Dilemma was the third section entitled “Personal: The Forest”. In this section, Pollan branches away from his analysis and critique of modern industrial farming. His puzzling and stressful encounter with a chanterelle mushroom (or was it a different type of mushroom?), introduces the book’s namesake—the omnivore’s dilemma. As omnivores, the human diet allows us to survive in a number of environments; this ability, however, is accompanied by a certain anxiety. What do we eat? Decades of delicate cuisine have helped to ameliorate this problematic question, but have also left us without a natural instinct for food. Pollan even dares to pose the spine chilling question, “…what’s to stop the human omnivore from eating anything—including, most alarmingly, other human omnivores?”

The Omnivores Dilemma was an engaging, albeit extremely long, read. It exposed me to an entangled history of agriculture and eating. The simplicity of eating disappeared decades ago, as exemplified by the many difficulties that Pollan himself encountered while trying to cook “the perfect meal”, a meal entirely composed of seasonal vegetables and meats. In comparison to what I learned from the first two sections of the book, Pollan’s firsthand struggle in the kitchen left me with the strongest impression. The contrast between Pollan’s laborious yet transparent “Omnivore’s Thanksgiving” and a quick and easy $4.00 McDonald’s hamburger is astounding. Pollan’s culinary goal is deeply telling of our food system, one that has morphed and diverged into a complex organism and one that is difficult to overcome.

This assignment provided me with the perfect opportunity to finally read the book that popped up in all of my classroom discussions. Instead of nodding along in nominal recognition, I have now personally ridden alongside George Naylor and his tractor, praised Joel Salatin’s small rotational farm, and struggled to make a completely natural meal. I do not know why I was waiting so long to read The Omnivore’s Dilemma.

I came across this site during our in-class discussion about the transnational relations between Mexico and the US that have resulted from NAFTA. It focuses especially on corn. The pdf’s at the bottom of the site have a wealth of information. Enjoy!

Following up on Steve Lopez’s article about Ron Finley and his urban garden in Crenshaw, this blog has a video about his garden. I’ve found that in the case of urban gardens, imagery is very poignant. Touching story.

The garden is looking good! It’s amazing the progress we have made over the quarter, with the collective help of our class and the amazing input from e3. The new beds look great, especially with the addition of the L-shaped bed and its stained bench. The bench gives the area to become more of a reflective space, rather than a purely agricultural zone. I would definitely recommend that we look into constructing more permanent benches around the perimeter of the garden, thus making it a more outsider-friendly area.

The new benched L-shaped bed looking nice in the sunshine!

The vegetables in the beds are also looking great. I, however focused on the potted plants around the perimeter of the garden. A lot of them were in dire need of some pruning and cleaning out! I went to town on a potted mint plan. 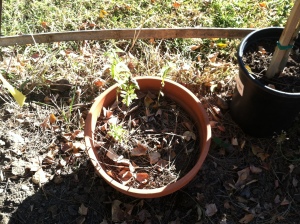 Mystery plant (?) before I tackled it!

I think it would be a great idea to plant some flowering plants along the outside of the garden (like we did with the blueberry bushes). This way we will be able to attract bees to pollinate our plants!!!!! Some good flowering plants to look into would be: rosemary, lavender, sweet peas, and marigolds.

Aviva and I met up at the garden early this afternoon around 11:30. While her blog post focuses on the progress of our plants (which look great!), I chose to write about the work that was being done to the garden site itself! As I am also part of the team mapping the garden this upcoming week, this info will be great for some before and after maps.

Members of E3 and other students were busy building 4 new raised beds. The new beds are the same size (3×6 ft) as the 8 current beds, and will be located in the open space to the right. An additional L-shaped bed was supposed to be added, but due to miscommunications with the lumber company, we did not receive the properly sized pieces of wood.

Here’s a link to the garden’s blog if you would like to check out some the more recent posts about the wood delivery and why redwood was the chosen material.

Working hard to finish off the first bed! 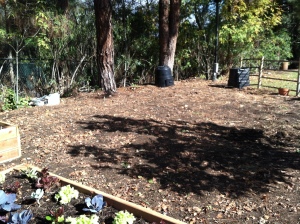 Me with power tools…

Neat article about the creation of “yuppie chow”, or what we may know as  more unconventional salad greens (arugula…etc). Author Julie Gunthman discusses how the production of this “organic” item is the result of a unique combination of  young, well-educated, wealthy “yuppies” and a hippie return to food.

The article discusses how the beginning of the organic trend can be traced back to Alice Water’s San Francisco restaurant Chez Panisse. The restaurant’s sustainable mission is noteworthy, but a look at the menu’s prices below reveals that high quality, locally grown, organic food is still out of reach for many.