Book Review- Genes from the Wild

Genes from the Wild- by Robert and Christine Prescott-Allen

In this scientific research published by Earthscan, Robert and Christine Prescott-Allen discuss the benefits and costs of using wild genetic resources in agriculture as well as provide in- depth backgrounds on a variety of genetically engineered crops. Although this research was done in 1983, the issues and information are still valid and applicable in today’s context of industrial agriculture.

Wild genetic resources are the favorable and heritable traits of wild plants and animals that can be used or have potential use to people, such as in agriculture. The application of genetics in crops became dominant in the 20th century, which over the years has contributed to the dramatic increase in the production of crops in the US, including rice, sugarcane, peanuts, and soybeans. Some crops such as tomatoes would not be able to grow commercially without the help of genetic resources. The ability to take advantage of genetic variation has allowed breeders to select traits such as environmental adaptation and rapid growth, increasing the yield and allowing non-native plants to grow successfully. Most crops have benefited from breeding with wild genetic resources, such as lettuce and carrots, with the exception of a few major crops, including soybean, cabbages, and citrus fruits. In forage crops, the major benefit of using wild species is the diversity of their growing conditions, allowing the range of domesticated grass to extend to lower latitudes, used to feed livestock. Another major consideration is the category of gene pool in which gene transfer is taking place; primary, secondary, and tertiary gene pools each differs in the fertility and viability of the hybrid species and utilizes different breeding methods to achieve gene transfer.

The main plant characteristics derived from wild species include disease resistance, pest resistance, high yield, vigour, environmental adaptations, high starch and vitamins, cytoplasmic male sterility, petaloid male sterility, and harvest and transport adaptations. The most important characteristic among those would be disease resistance, exhibited by a single dominant gene. Before the use of disease resistant genes, crops suffered immense damages, such as the grassy stunt epidemic in Asia during the early 1970s. Although the gene is easily transferred, there are challenges involved in crossing; the main one is the package-deal effect, which is the common case of disease resistant genes being linked to the genes for other undesirable traits, such as bad taste. With this trade-off in mind, breeders would sometimes have to risk lowered resistance in order to maintain the quality and taste of the crops. However, there is no leeway when it comes to fungal diseases, which are the most severe in crops, making it a priority to purge them.

This research acknowledges that despite all the advantages that wild genetic resources can provide, there are also major costs to consider. Wild genes are threatened by habitat loss, over-exploitation, competition from introduced species and predators. An example is the decline of wild sunflowers in California as a result of urbanization in L.A. It’s not obvious to us that valuable gene pools are disappearing because of the appearance of species abundance. There are two ways in which a germplasm can be conserved- ex situ and in situ. Ex situ is the process of conserving resources outside of their natural habitats (e.g. zoos and gene banks). In situ conservation takes place in their native habitats (e.g. national parks). Ex situ banks are favored by most breeders, firstly, because they can be located anywhere, whereas in situ sites could be far away from breeders. Secondly, in situ banks could be subject to disturbance by poachers, firewood collectors, livestock or the destruction of the sites. Nonetheless, the priority of most conservationists is in situ conservation. In situ banks can keep everything safe in one place and are easier to protect, while ex situ collections risk loss due to human error.

I think this book offers a fair, balanced perspective on how wild genetic resources can benefit society and the importance of mitigating the consequences that entail in terms of the loss in biodiversity. What I find interesting is the difference in the ways of persuasion the authors used to address the advantages and disadvantages of wild genetic resources. They approached the advantages in the most practical and human-relevant manner, focusing on the reaping of economic and social benefits, but when they shifted their discourse to the need for conservation, their style of approach changed to one that demands altruism and insists on our inherent duty to the environment. They did not stress on how conservation can actually benefit society, which would have rendered their persuasion more effective. 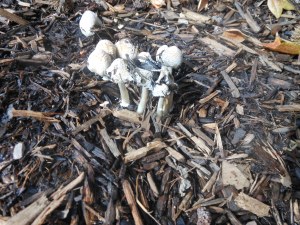 Not sure whether to take them out or leave them

It was raining this morning, so I didn’t do any watering. I removed some weeds and I also noticed a lot of fungi growing in the beds. 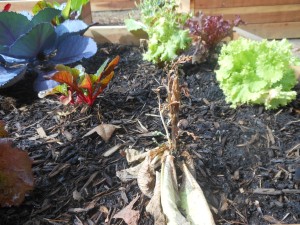 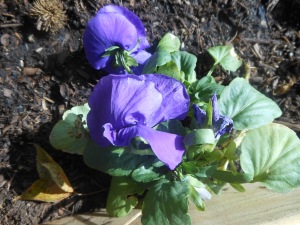 These flowers seem to be wilting. Maybe they’re getting neglected because they’re located at the edge of the bed. 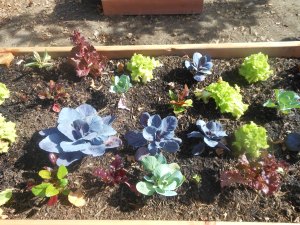 Don’t forget to water the edges of the beds where some of the plants are growing!

I also noticed that more carrot sprouts have appeared.

Since it was raining when I went there, I didn’t water the plants. Most of the seedlings are doing well and making good progress. The carrots haven’t sprouted yet.

The cabbages and lettuce look nice and healthy. 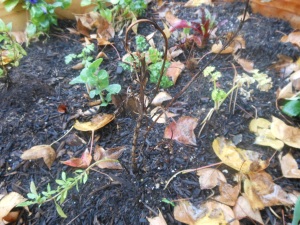 Not sure which plant this is. The seedling doesn’t seem to be doing well.