As I walked into the garden I noticed we have a new sign up front. I really like the blue and black color scheme of it. I did not notice any major changes to the garden since our final visit to the garden as a class two days ago.

I did, however, notice that there were some plants growing on the bottom of the some of the beds (Fig 1). I remember another student also posting about this about a week ago. I think it is great to have other plants growing that were not intentionally planted. It makes the garden more natural.

I noticed the carrot plants look like they had grown more (Fig 2). I am curious how big the vegetables are. I was a bit hesitant to pull them out of the soil to check though.

The last interesting observation I would like to share is how impressed I am by the size of the tree at the far end of the garden (Fig 3). I’m not sure if it grew a lot this quarter or I just never took a good look at it. I know trees grow pretty fast because my parents have a couple at their house that I trim about once a year.

Fig 3. Tree at back of garden.

I watered the garden this morning, but the real exciting things happened when class started!

We worked on the following things:

1. We finished the bench!

2. We cleaned out the (molding?) buckets of standing water by the back fence!

4. We transported some of the orphan plants!

6. Ellen and I made this pea tee pee! 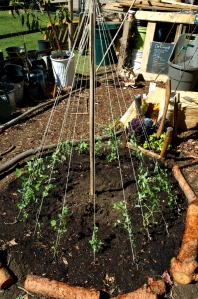 Overall it was a very productive last class day in the garden, I think most of us will be going back often, even after the quarter ends.

I visited the garden early afternoon today. It rained a lot last night and this morning, so I didn’t have to do any more watering today – the soil was still damp. In my friend’s words, “Mother Nature is watering the plants for you!”

I did harvest a bunch of chard though. The leaves were nice and crisp.

Fresh chard, all ready for harvesting!

The beds look a bit empty after we pulled out the cabbage and lettuce. Maybe we can plant some new things on Tuesday? 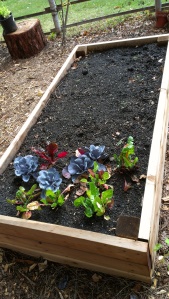 Also, the carrots, quinoa, and fruits (pomelo?) are doing well!

Fig 1. There is a vine growing on the sign up front.

Fig 2. Overall picture of the garden. 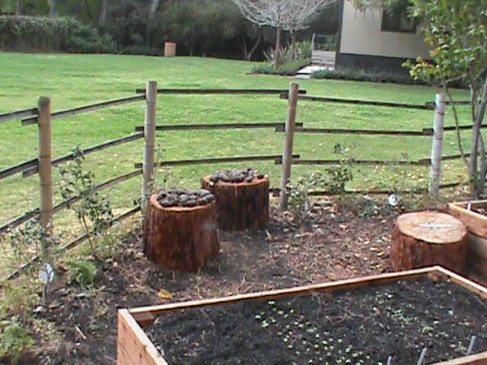 Upon entering the garden this morning I noticed a vine growing on the sign in front of the garden (Fig 1). I think vine-like plant decorations are great. My grandfather has one growing on a fence at my parent’s place in Orange County. Also, all the plants were naturally watered by the rain. Everything was still drenched, so I assume it rained a little before the time I woke up this morning.

In regards to growth most of the plants look like they are just starting to grow, not bearing any edible parts yet. Though many of our plants are root vegetables, so they may have grown a lot but are just unseen underground. The overall look of the garden is shown in Fig 2.

I have not done a report on the garden since the beginning of the quarter. A major difference I saw from then and now that I had pointed out in my first post were the dead plants on the right side of the garden (farthest away from the water spout). They have been replaced with new plants as seen in Fig 3. Hopefully, they will not neglected even thought they are farthest from the water source.

The garden looked absolutely beautiful today! Someone had already watered when I got to the garden this afternoon, but a lot of the beds and perimeter plants were already drying out so I re-watered them.

The blueberry bushes have tons of flowers on them: 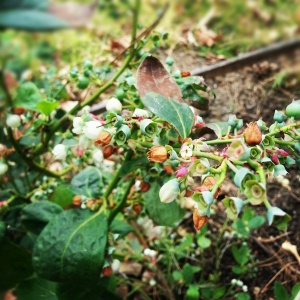 So does the orange tree:

Like someone mentioned in a previous post, a lot of the cabbage, lettuce, and other plants on the perimeter of the garden look like they are struggling, perhaps because the water cannot drain. They are flooded with murky water & thick (gunky) mud, so I dumped some of the water, leaves and gunk from a few. But we may want to do something more about this. Here’s an example:

The purple basil is starting to sprout:

Sorry for the bad quality close-up!

That’s all for today.

I came to the garden at around noon yesterday, where I was immediately greeted by bees. I would have taken a picture, but I didn’t feel like risking my life…

I walked around the garden and noticed that the new ground cover looks very nice and is much easier on the feet than spiky seeds.

Plants are sprouting everywhere and the carrots are coming in. The herb garden is doing very well, but I think we may want to add more plants to it. The radish and cabbage are ready to eat and the peas are growing really fast. 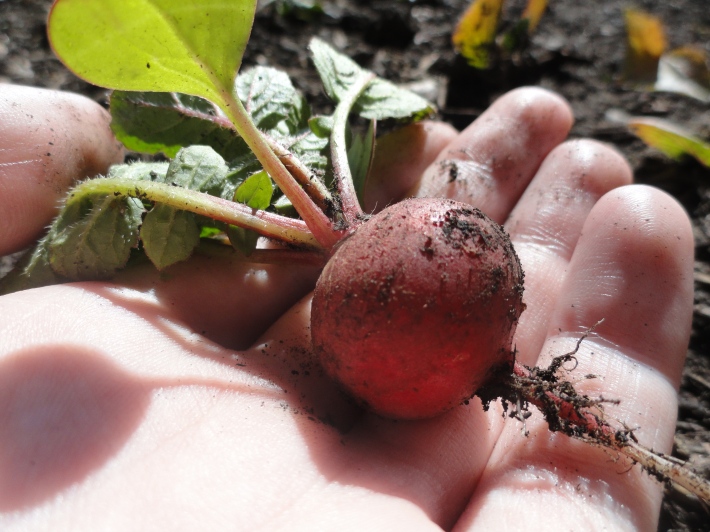 Now that plants have been harvested, there is a lot of empty space in many of the beds that can be used for planting. 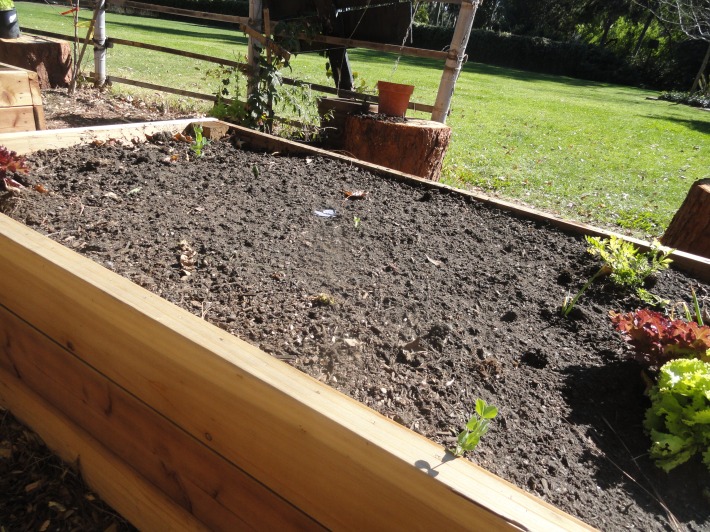 The garden art is very lovely and creative, we should continue making the informative signs and natural decorations.

When I got to the garden I saw that someone else had already watered it, but the beds already looked a little dry– it was so hot today! Anyway, here’s some things I noticed while watering/clearing out debris:

Lettuce is definitely starting to bolt, like David King explained it would: 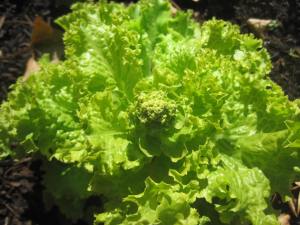 I was wondering where the guava tree is going to go? One had fallen off, and another is still on the tree: 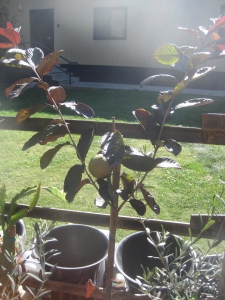 Some of the blueberry bushes’ leaves are starting to turn brown: 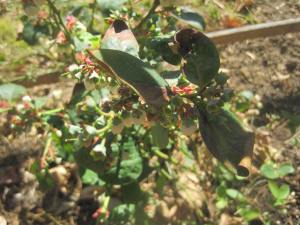 The beets and kale are starting to sprout in the bed with the big beets sign!: 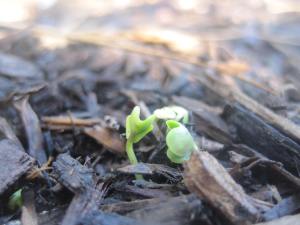 There’s a plant with little white flowers growing at the side of one of the beds. It’s really pretty and I’m wondering what it is:

See you all tomorrow at the garden!